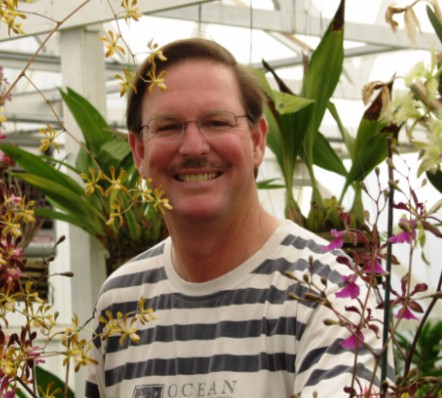 Fred Clarke has been growing orchids for 35 years and has been hybridizing for 25 of those years. He has over 28 years as a professional grower and manager in the horticultural industry.

Fred is a passionate orchid grower whose curiosity in orchids is broad and varied. Although developing Cattleya hybrids has been his sustaining interest, he is also actively creating new Australian Dendrobiums and Paphiopedilum hybrids plus some others to be named if they work out!

His pioneering work in Catasetum inter-generic hybrids led to the development of several notable hybrids, most recently the grex, Fredclarkeara After Dark, which produced “the blackest flower ever witnessed.” This grex has received eight FCC’s and over 41 awards worldwide.

Fred is an Accredited Judge in the Pacific South Judging Region. His plants have received hundreds of quality awards from the American Orchid Society. 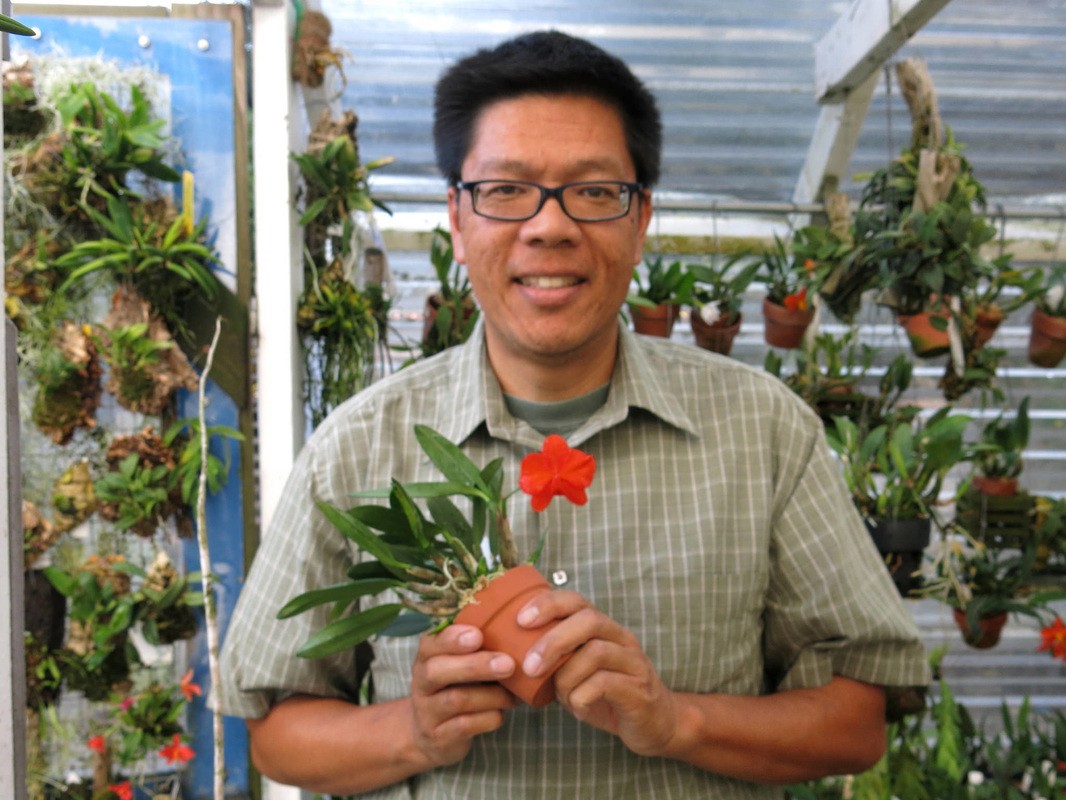 Peter T. Lin’s fast-paced PowerPoint presentation will take you on a journey of some of the world's most strange, bizarre, yet wonderful orchid species! From Bulbophyllums to Zootrophion, there is much diversity in Orchid flowers. We’ll take a look at Orchid flowers that have wild colors, have crazy lips, or are fringed, hairy, or just alien-looking!

Peter started growing orchids over 25 years ago, but then stopped due to school and starting a career. It wasn't until about 11 years ago that the orchid “bug” came back, and he is now heavily involved once again.

He is an accredited judge with the American Orchid Society and a hybridizer of mini-catts. He enjoys meeting with other orchid enthusiasts, and can often be found at various orchid shows and societies around the country. He also has hundreds of photos of his orchids that he maintains on Flickr. The images can be viewed at http://www.flickr.com/photos/minicatt/collections/.

Due to limited growing space, Peter likes to specialize in miniature orchids, both species and hybrids, and has received numerous AOS awards. His other interests in orchids include Dendrobiums, Angraecoids, and Neofinetias. He maintains a collection of a thousand or more orchids at his home in Southern California in 3 small greenhouses, as well as in the house under fluorescent lights.

Peter will be providing the plants for this month's raffle table. There will be a nice selection of orchids, so be sure to buy your tickets! 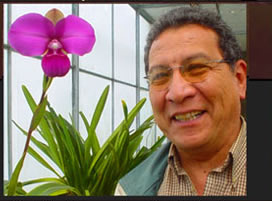 In 1972 Alfredo Manrique started his nursery business, Centro de Jardineria Manrique (CJM) in Lima, Peru. CJM roughly translates to Manrique’s Garden Center. He also runs the website: phragmipediumkovachii.com. His main focus at the time was on Conifers, Azaleas, and Begonias (orchids came later). The first orchid to enter his collection of ornamental plants was in the 1980´s, a Cattleya máxima, which he currently still owns.

In the early 1990´s, Alfredo realized there was a great demand for Peruvian orchid species.

He decided to convert the focus of his nursery, and dedicated 90% of it, to the cultivation of orchids.

In 2002, after the discovery of the Phragmipedium Kovachii, CJM was the first nursery to obtain a permit issued by the Peruvian Goverment, to collect 5 plants of this species. Together with  the help of Glen Decker , Fritz Schomburg and Peter Croezen, the cultivation , propagation and hybridization of this new species was done with excellent results.

Manrique's nursery has continued to work on different species and hybrids of orchids. In 1995 he started his own in vitro laboratory, working mainly on finding new ways to speed up the growing process of the in vitro seedlings.

Brandon Tam has been growing orchids since the age of seven, starting with a white flowering Cymbidium his grandmother gave to him. She has been the source of his inspiration to further his studies within the botanical world and pursue a career within that field.

At the age of 14, Brandon began volunteering at The Huntington Library, Art Collections and Botanical Gardens. When Brandon turned 16, he graduated from high school and began attending college. A few months after graduating high school, the Director of the Botanical Gardens at The Huntington offered Brandon an internship within the Orchid Department to reorganize and perpetuate the collection. Brandon earned his Bachelor of Science in Plant Science at the California State University, Pomona, by the age of 21.

Brandon has been with the institution over eight years in total, but over five years with the Orchid Collection specifically. Currently, at the age of 22, Brandon is the Orchid Collection Specialist, focusing mostly in Paphiopedilums as a large portion of the collection at The Huntington consists of that specific genus.

Brandon oversees one of the largest Orchid Collections in the United States’ of about 16,000 plants. Which involves hybridizing new plants, to the propagation of rare and endangered species.  It is a high priority for The Huntington to further the advancements of plants within the orchid world.

Brandon also maintains the Amorphophallus titanum collection, better known as the Corpse Flower. He manages and oversees 50 titanums and has successfully bloomed one flower during his tenure there in August of 2014.

Currently, Brandon is working on the conservation aspect of the collection while acquiring and adding more rare orchids to The Huntington’s collection. He belongs to several orchid societies in Southern California. Brandon plans to travel the world orchid hunting on behalf of The Huntington Botanical Gardens. This month's speaker is Francisco Miranda of Miranda Orchids, formerly of Brazil, now in Florida. One of my initial contacts with Francisco was during the Rio de Janeiro World Orchid Conference in 1996 when he was the Speaker's Chair. He will speak on “Brazilian Cattleya Species.”

pleted his Master’s on “section Cattleyo- des of the genus Laelia.”

Since then, his main interest has been on the Brazilian laelias and cattleyas. He is the author of several papers ranging from species descriptions to subjects of grow- ers’ interest in Brazilian, German and U.S. publications. He is also author of two books.

In 2000 he moved to Florida where he operates Miranda Orchids, a nursery spe- cializing in Brazilian species and the Catt- leya alliance. He also leads trips to Brazil and frequently visits Brazilian habitats to find new and/or interesting orchid species.

He promises a great plant opportunity table and will also have plants for sale. You may pre-order from his website at: www.mirandaorchids.com

Phyllis S. Prestia, Ed.D. is a retired educator and Middle School Principal. She received a Doctorate of Education at Rutgers University, where she also served as instructor in the graduate education program.

Originally from New Jersey, she moved to California with her husband to retire in the sunny, San Diego area and grow orchids. Her collection includes a variety of species and hybrids across several genera grown both in a small greenhouse and three outdoor growing areas under shade cloth.

Phyllis recently spent nine days trekking through rain forests in Madagascar. She will highlight the species she saw and photographed, with an emphasis on Angraecoids.

Next, she flew to Johannesburg where she judged and attended the World Orchid Conference. She will highlight the orchids of Africa she saw and photographed and the displays and orchids which took the highest awards at the conference.

As she also grows many of the species she will highlight, she will review the culture for these orchids, including tips from her own successful experience growing them.